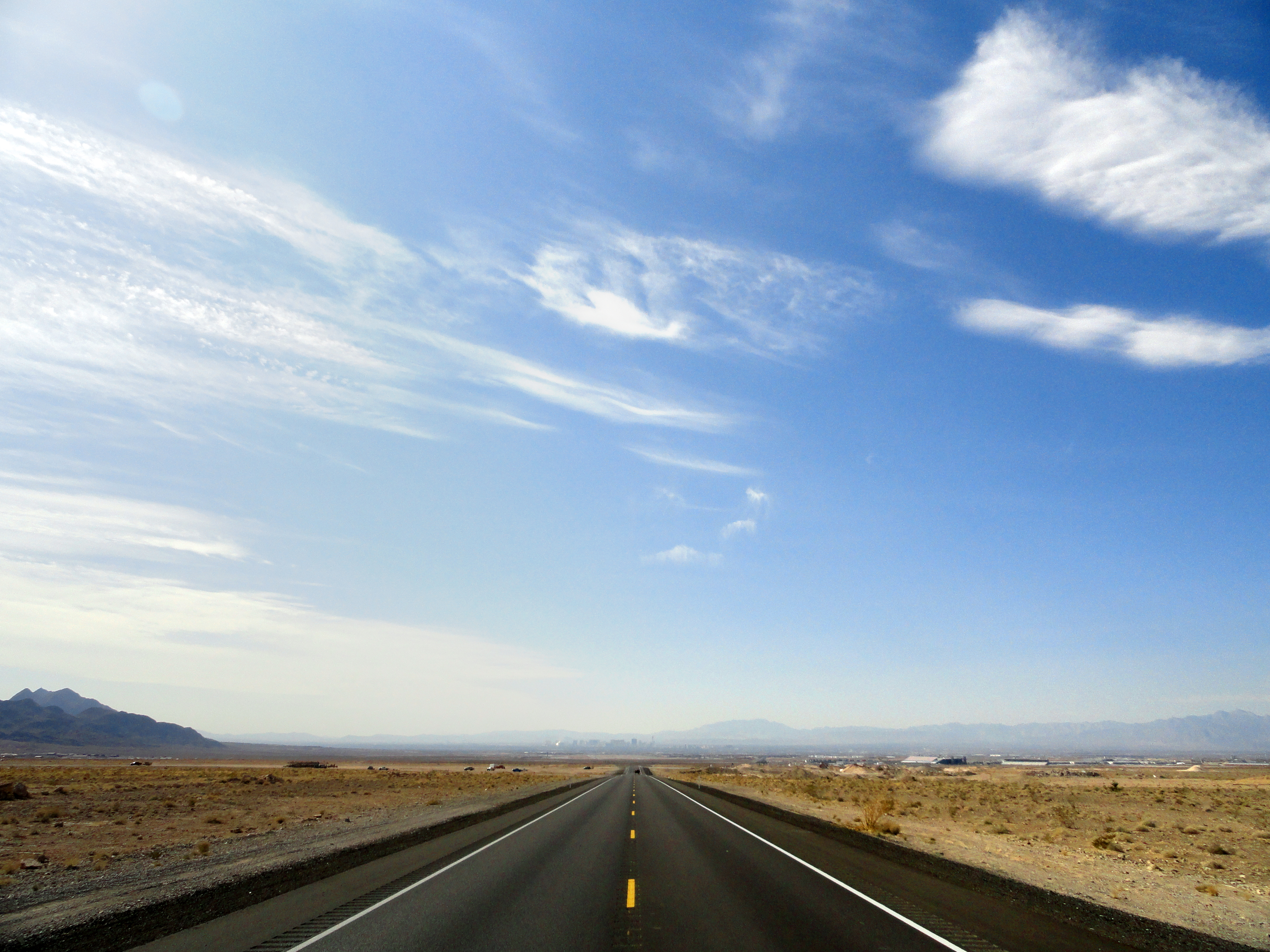 On our recent trip to Las Vegas, my wife and I decided to take a look at Sin City and the surrounding area from a different point of view—atop a Harley Davidson motorcycle. Along with the couple with whom we were traveling, we headed down to Eagle Rider of Las Vegas, where one can rent a wide range of Harley Davison models ready to hit the road. Eagle Rider set us up with a pair of brand new 2018 Ultra Classic Electra Glides, four helmets, and two tanks full of gas. After completing the rental paperwork, we were on our way. 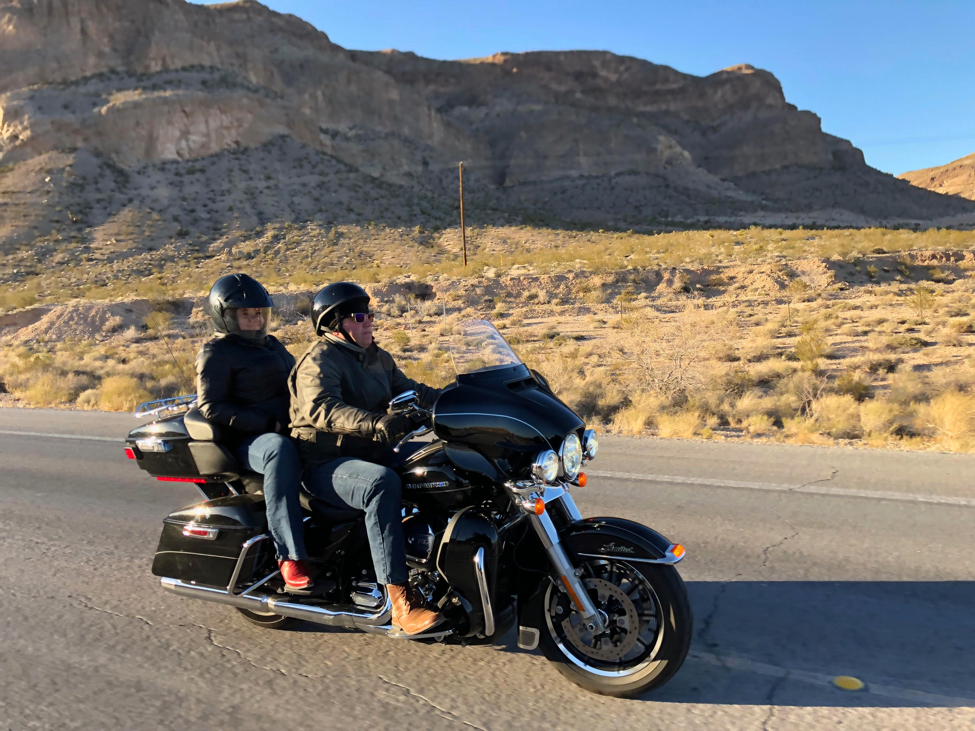 We first cruised around town for a bit, including up and down “The Strip,” and past the old downtown area now known as Fremont Street Experience. Seeing the sights from a motorcycle offered a whole new experience. The open air of the bikes allowed us to take in all of the sounds and smells of this electric city along with the well-known visual sights. As is usually the case, we were able to find plenty of biker-friendly places where we were welcomed, and parking was no problem. We had a great time hopping around town, but the real adventure was to come the next day.

After a late breakfast, we met up with a few local bikers who volunteered to show us some great riding spots in the outskirts of Las Vegas. After getting to know everyone, and a quick stop to gas up, we headed out of town southbound on I-15. Most visitors to Las Vegas never venture out of the city limits, but once you do, you realize that it is surrounded by a great big desert. A really, really, big desert. The rolling hills filled with sage brush lead to never-ending mountains and canyons. About 30 miles out of town, we exited the expressway for a two-lane desert road, heading west toward Goodsprings, Nevada. After about twenty minutes of winding, curvy pavement, the town came into sight. We all realized very quickly that there is only one noteworthy thing in tiny Goodsprings: the Pioneer Saloon. 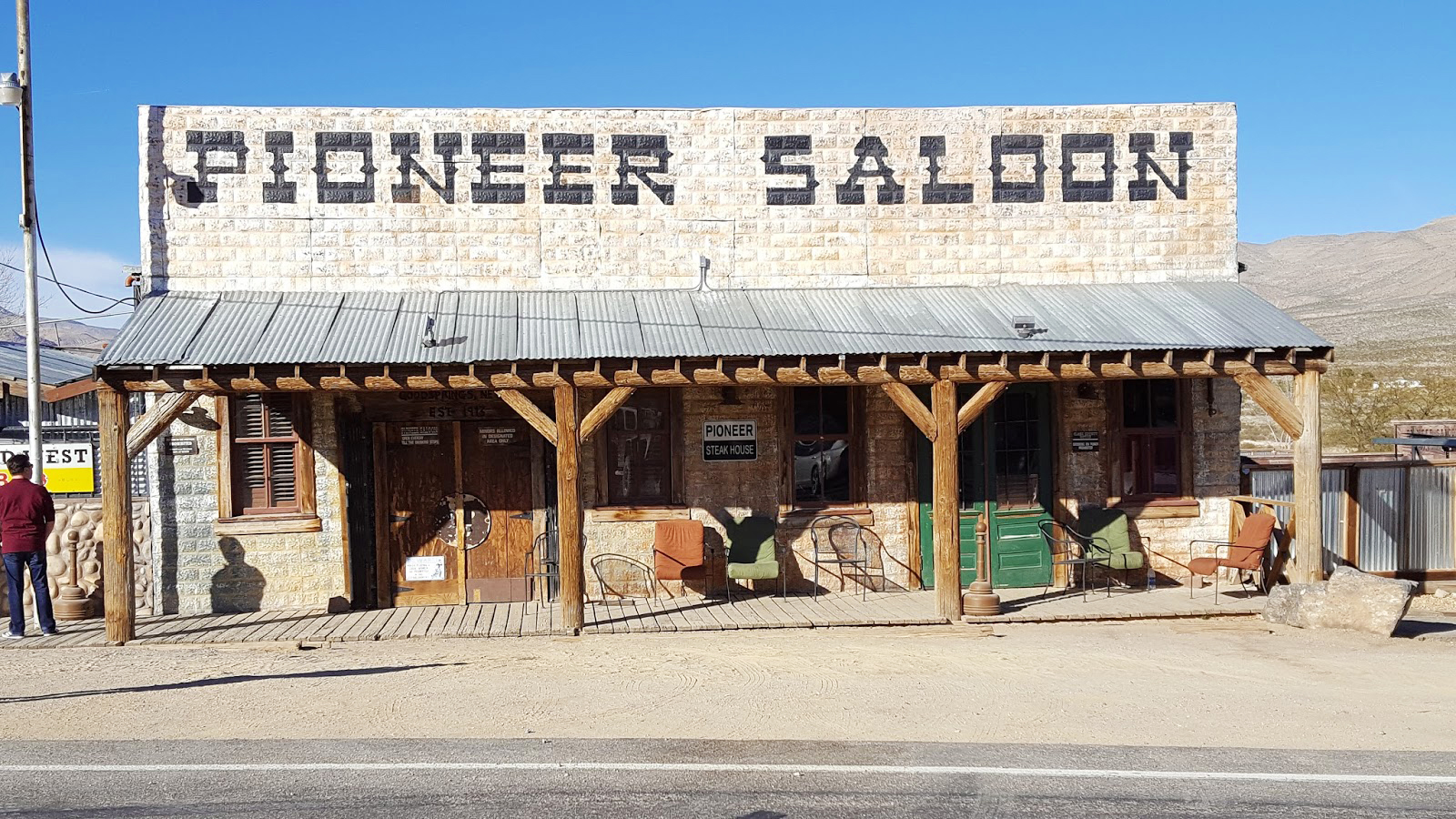 As we approached the Pioneer Saloon I could not escape the feeling that we had entered a time warp. Below the hand painted sign on the front of the building is a wood-planked covered porch, giving us a genuine feeling that we were back in the Old West of the 1800s. A creaking wood door leads into a saloon that looks like it’s straight from the set of Tombstone. The interior is heated by a wood-burning stove and has a smell that is both interesting and suspicious. There is a strict no-tie policy in this establishment, evidenced by the hundreds of neckties hanging from the rafters and ceiling. Disturbingly, it appeared that many of these were cut, forcibly clipped off from the necks of their wearers. 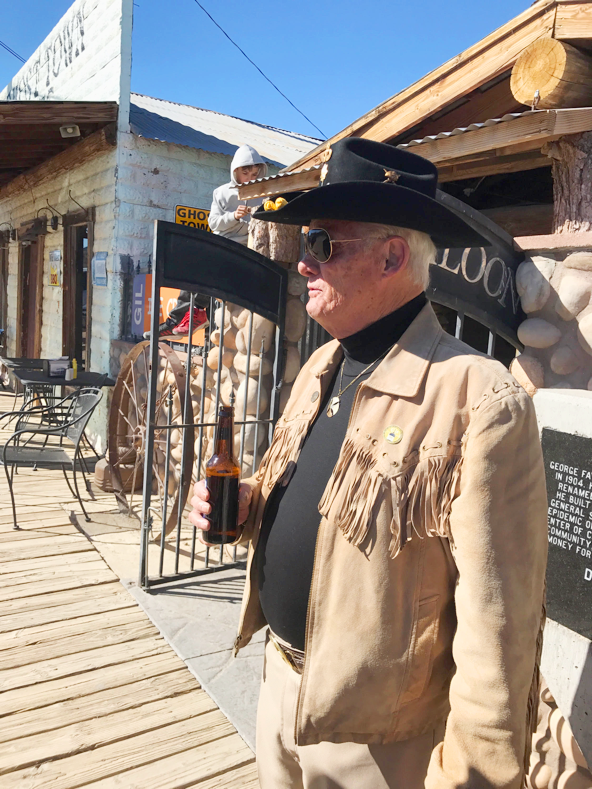 Out back there were about a dozen tables, each situated around a fire pit with a roaring blaze. As we gathered around one of these, we were greeted by an interesting fellow who at first seemed to be a security guard for the place. He was dressed like a sheriff from the 1800s, but it emerged that he held no official position in either the saloon or the town. He was just one of many interesting characters we encountered on this voyage. After a quick lunch, we saddled back up on our Harleys and hit the trail. 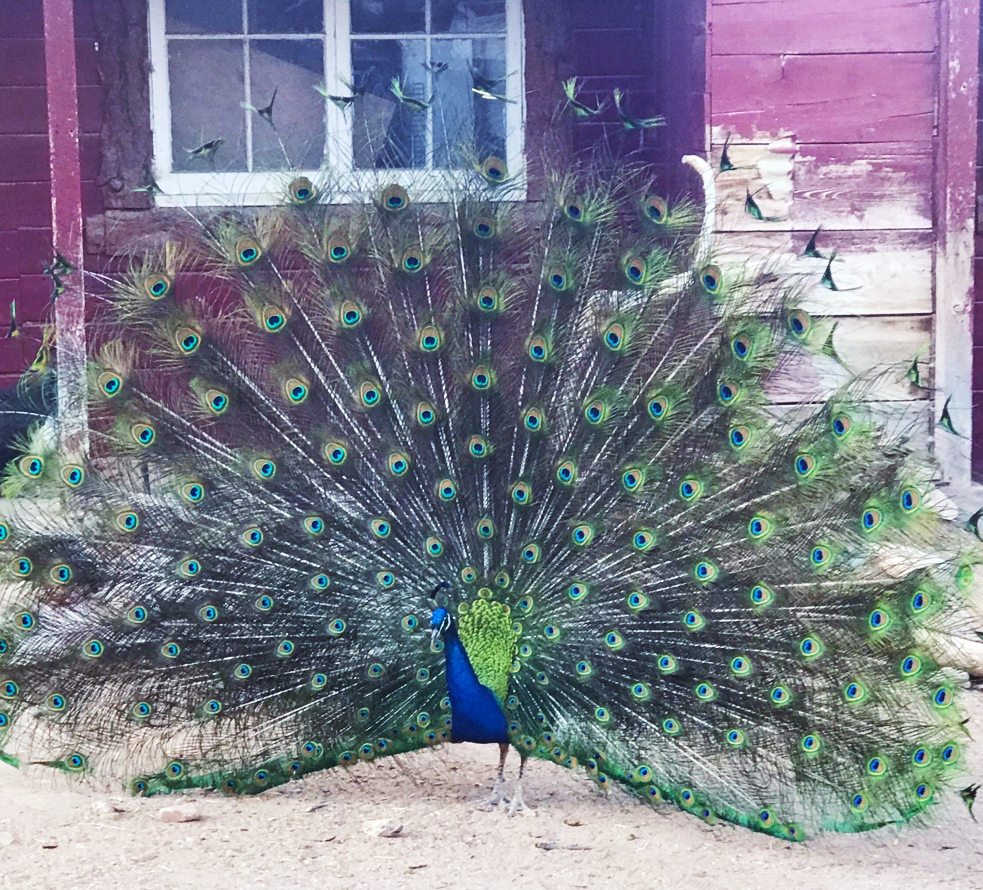 It was about a ninety-minute ride to our next destination. This was Bonnie Springs, Nevada in the infamous Red Rock Canyon. This little town was once a working silver mine, and is now set up as a tourist destination. Tours of the mine are available, and there is a banquet hall that was hosting a wedding reception during our visit. Behind the restaurant is a sort of makeshift zoo, complete with ducks, peacocks, and roosters. We also saw a few lizards, and a turtle in the homemade pond. As soon as we all had a moment to stretch our legs, we were ready to continue on into the canyon. 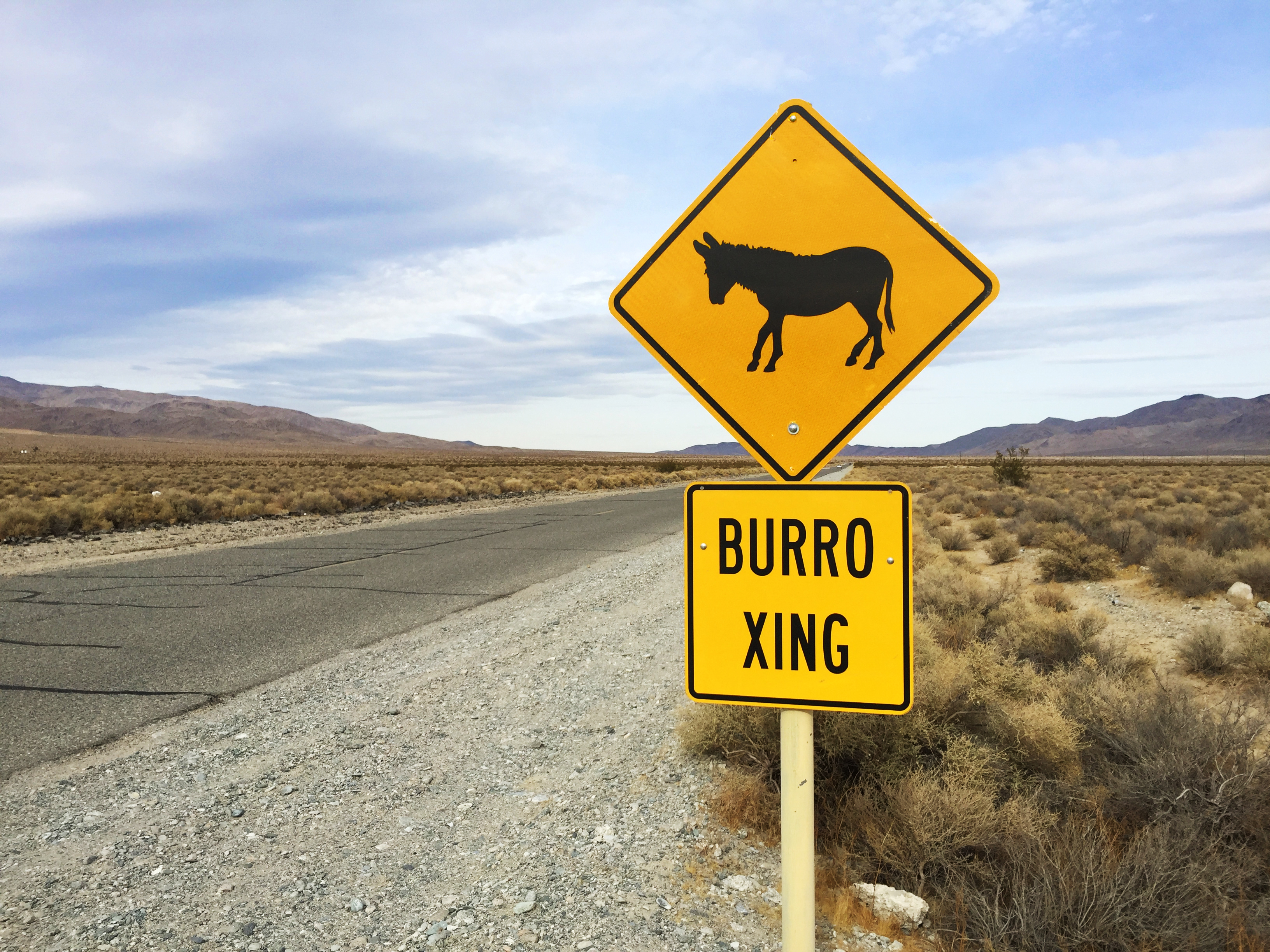 Cruising through Red Rock was definitely the highlight of the day. Surrounded by rocks and cliffs—and yes, they actually are red—the road winds left and right, and up and down. As we continued along, I couldn’t help but think that the ride was better than any roller coaster I had ever experienced. There is very little out here to remind one of civilization aside from the occasional road sign. Some of these are quite unusual, such as the one for “Burro Crossing.” Apparently, the small donkeys are indigenous to the area and roam freely. After about an hour of this thrill ride, the skyline of Las Vegas became visible on the horizon, and our adventure was about to conclude. 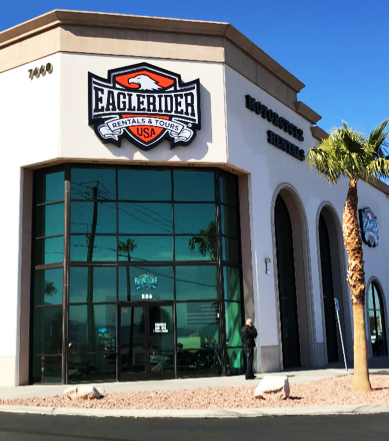 This was the most fun and excitement we have ever had during a trip to Las Vegas, and we didn’t lose a penny in the casinos! I definitely recommend it to anyone who likes to ride, for a nice diversion from the adult playground that is Las Vegas. We agreed that on our next trip, we will head north on the Extraterrestrial Highway and pay a visit to the A’Le’Inn of Rachel, Nevada, or southeast to cruise on two wheels over Hoover Dam. Either way, our friends at Eagle Rider of Las Vegas promised to have the bikes cleaned up and ready to go!.