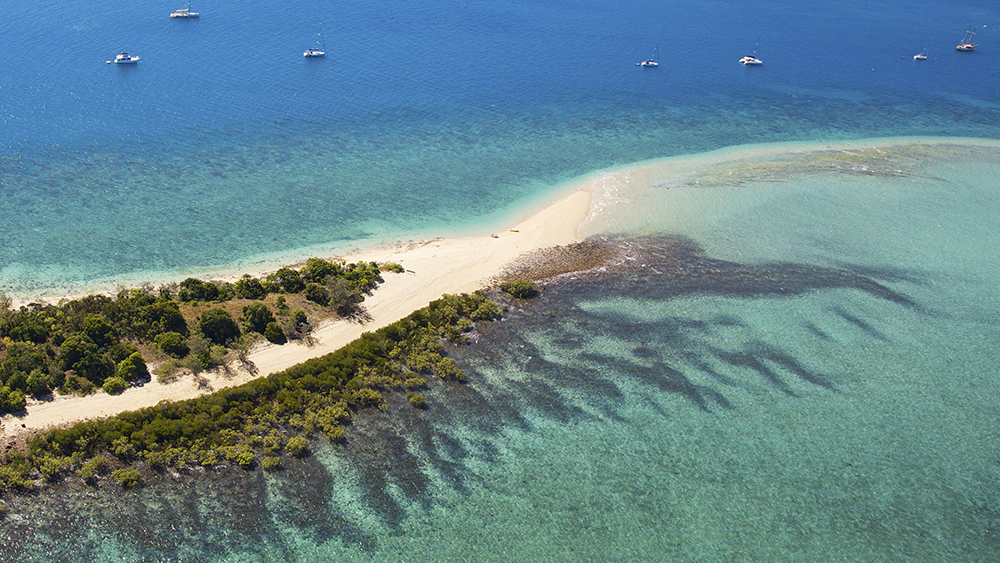 Hugging Australia’s northeastern coast like a necklace, the Great Barrier Reef stretches some 1,400-plus miles brimming with marine diversity; it’s the largest coral reef system in the world. You don’t have to travel halfway around the world to discover some of the reef’s secrets and surprises. Here are seven surprising facts.

The first European to find the Barrier Reef literally ran into it. You might expect there to be some kind of triumphant story behind the discovery of the Great Barrier Reef. But that’s not what happened. On June 11, 1770, Capt. James Cook’s ship, Endeavour, ran aground on what’s today known as Endeavour Reef. It took six weeks to repair the vessel at the site of the present day Cooktown.

A significant number of the world’s dugongs live there. Like their cousin the manatee, these herbivorous mammals are also known as sea cows. Growing to almost 900 pounds, dugongs are more closely related to elephants than to fellow marine mammals such as whales, according to Australia’s Great Barrier Reef Marine Park Authority. Australian waters host around three quarters of the world’s remaining dugongs – many of them in the Great Barrier Reef.

It’s bigger than the United Kingdom, Holland and Switzerland — combined. The Great Barrier Reef is so large you can see it from outer space. It is actually made up of a huge number of individual reefs — more than 2,900 in all — and is comparable in size to Italy.

More than one in 20 fish species calls the Great Barrier Reef home. That’s more than 1,600 species living in the reef (out of the approximately 30,000 species of fish in the world), says GreatBarrierReef.org. There have also been 30 species of whales, dolphins and porpoises recorded there.

Six of the world’s seven marine turtle species reside in the reef. Of these, four are endangered within the reef itself, according to the World Conservation Union: the loggerhead, green, leatherback and hawksbill turtles. The last two on that list are critically endangered, while two others (flatback and olive ridley) are considered vulnerable.

The Barrier Reef is a habitat for the world’s largest clam. That would be the Giant Clam, which grows to a weight of more than 400 pounds and is one of the most endangered clam species. The clams live to an average age of 100, according to the Thala Beach Nature Reserve. Should you encounter one, be sure to come back to the same spot in 50 years or so to greet it again: Once a Giant Clam finds its home on the reef, it will remain there throughout its entire life, feeding on plankton and algae.

The Great Barrier Reef faces many threats. Climate change, illegal fishing, declining water quality and outbreaks of the crown-of-thorns starfish number among the many forces placing the reef in peril, the Great Barrier Reef Marine Park Authority notes. Coastal development in the Queensland area has also placed pressure on the reef’s ecosystem. Many organizations, including the World Wildlife Foundation and the Australian Marine Conservation Society, are fighting to protect the reef from further damage.